Audio-direct.com get commissions for purchases made through links in this post.
Home / Microphones / Shure PG58 vs SM58: Which Is Better and Why?

Shure is one of the most authentic microphone manufacturers. Since 1925, their products satisfied millions of artists and professionals with their amazing quality and unmatched durability.

In this article, we’ll take a look at two of their best dynamic microphones: Shure SM58.

At first glance, they might look identical. However, when you put them in action, the differences will reveal. Let us see what they have to offer.

Most customers said that the two microphones sound rather similar. However, when you dive deeper into the specs, you will notice the differences.

Both microphones can pick up to 15 kHz. This makes them perfect for recording soaring vocals and loud instruments. However, toward the lows, SM58 can pick 50 Hz while the PG58 is capped at 60 Hz.

To be frank, the difference isn’t that large. Still, the SM58 would be slightly better in picking the faint nuances that make your tracks unique.

Impedance is among the most notable differences between these two microphones. The SM58 falls lower than the PG58 with 150 and 300 ohms, respectively.

In a studio setup with short cables, these numbers will not cause any difference in the picked sound, not by a long shot. However, as the cables get longer, the higher impedance will cause higher frequencies to lose their crispiness.

Again, both microphones function perfectly in a closed studio setup. Since they both have a cardioid polar pattern, they favor front-facing sounds over those coming from the back. As a result, they have an inherent noise cancellation perk.

As a plus, the SM58 has a built-in pop filter, which reduces some of the plosive sounds. Still, a lot of users preferred to buy external filters for both mics to enhance clarity.

But when you take these microphones into a live performance, a huge difference starts to unfold. Unfortunately, the PG58 picks up almost all the shakes and quirks you make, especially if you are not using a stand. These movements usually get amplified to form incredibly annoying distortions.

Since the construction of the SM58 is a bit thicker, it does not have that major flaw. It can be used by the most energetic artists without worrying about those infernal distortions.

Generally, the SM58 picks flatter tones. This gets especially noticeable in mids and highs. The PG58, on the contrary, produces brighter and clearer sounds.

Specification-wise, there is nothing that supports this fact. The impedance does not have an impact unless with long cables. And the slight difference in the frequency range is in favor of the SM58. Still, this observation has been reported by many users.

On the bright side, you can fine-tune the frequency signature as much as you like with the right equalizer settings. 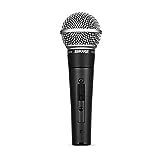 The versatility of the SM58 provides the best value. It excels with better noise cancellation, lower impedance, and a bigger frequency range. This way, you can use it to record a quiet podcast or a soaring live performance.

When you place the PG58 and the SM58 next to each other, some people might not be able to tell them apart. They both come in the classic black/silver design with equally sized grill heads. However, the heads are not interchangeable since they are slightly different in size.

Both microphones are equipped with XLR ports. Nevertheless, they differ in the type of the attached cable.

Shure provides 3 versions of the PG58. The microphone itself is the same. But each version differs in the accessories.

Lastly, the PG58-LC doesn’t have any cable whatsoever. Instead, it comes with a microphone clip, 5/8″ to 3/8″ thread adapter, and a storage bag.

Unlike the PG58, this microphone has more options. The most basic SM58-CN comes with an XLR-XLR cable.

The SM58-LC doesn’t have a cable or any other accessories. On the other hand, the stage performance kit comes loaded with a cable, mic stand, and mic clip.

It is important to note that all the previous versions come without an on/off switch, unlike the PG58. However, you can still enjoy the convenience of the switch with the SM58S.

This can be considered as a tight win for the SM58. The fact that it offers two versions with and without the on/off switch makes it more versatile.

Podcast recorders usually want a switch. This way, they can directly turn the mic off without having to interact with the sound system. Sound engineers, on the other hand, often opt for the switchless version to avoid turning off the mic by mistake.

Although both microphones are made of die-cast metal, the PG58 turned out rather heavier. The SM58 is estimated to weigh 10.5 ounces, while the PG58 lies around 22.5 ounces.

In a live performance, these numbers put more odds in the SM58’s favor. You will find yourself free to release your full energy without feeling the slightest bit of restriction.

If you think the lower price of the PG58 correlates with a lower durability, I am happy to say that this is not true. Shure is famous for its amazingly built products. They live the longest with little to no change in performance.

Lucky for us, the PG58 is no exception. It is built with premium materials that guarantee years of intensive use.

The heavier weight of the PG58 can be a deal-breaker for a lot of artists. Also, it might make it more likely to damage in case of a forceful drop.

As you saw, the SM58 comparison ended with the latter deservingly winning. The SM58 picks lower frequencies, produces less distortion, and feels a lot lighter. Also, its versatility makes it suitable for live performance, recording podcasts, or sound engineering.

The only aspects in which PG58 excels are the clearer mids and, obviously, the affordable cost. As for the clear sound, you can tweak the SM58 with the right equalizer to do the same job.

But if you want to save some bucks, the PG58 will offer sublime durability to live until you are ready for an upgrade.

I hope this review helped you reach a decision. See you in another one!

Up next: The Best Condenser Mic Under $200
You may also be interested in: What is mic monitoring?